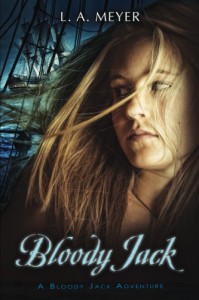 Bloody Jack is a coming of age story about a young girl who dresses up like a boy and signs up as a Ship Boy for the Royal Navy. Aboard the HMS Dolphin she falls in love, earns the nickname "Bloody Jack", and gets her first period (which promptly makes her thing she's dying of a plague!).

It was a fun adventure and it had some great characters, but I did have some issues with the book.

I felt like it was a little older than the target range. I wouldn't say that the book is graphic, but it contains a fair share of violent deaths. Jacky herself claims to be about 12 or 13 and while this is around the time most kids are getting interested in the way of a gentleman with a lady, so to speak, I found the book to be very forward in this. On top of that, one of the sailors turns out to be a sodomite and made for some very awkward scenes.

I wish that Jacky had been a bit more of a role model. She's got an independent adventure that would be a great read for young girls, but she was a bit too self-conscious.

I listened to the audiobook and it was fantastic, but I can't imagine reading the book in text form. The book takes place in London in the late 1790s and, as an orphan, Jacky has that very rough street dialect of English. A quote from the beginning of the book:

"...he's right 'cause me mum and me sister both goes off the next day and the men come back and takes me mum and puts her in the cart, her legs all danglin' over the side and not covered up proper, but it's Muck that comes and picks up me poor little sister and throws her all limp over his shoulder. I din't know 'im as Muck then, but I do later, and it's Muck what takes me out all bawlin' to the street and sets me on the curb."