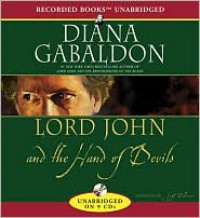 Lord John and the Hand of Devils is a collection of three short stories featuring Lord John. I did enjoy how they each had a supernatural mystery to them that was less supernatural then it seemed.

Lord John and the Hellfire Club is more of a slice of life story than a true mystery, it's quite short but does give some insight into George Everett that comes in handy in the first novel.

Lord John and the Succubus was a fun mystery about an apparent succubus while John is stationed in Prussia. We are introduced to Stephan von Namtzen who provides somewhat of a romantic interest for John.

Lord John and the Haunted Soldier follows the events of the 2nd novel, LJ and the Brotherhood of the Blade. Lord John is brought before a board of inquiry regarding a cannon explosion that resulted in the death of an officer and Lord John launches his own investigation into the matter of faulty cannons. Intrigue abound here.

Definitely worth the read to get the full picture of Lord John's life and to get the tiny background details that make some of the novels that little bit better.
Tweet